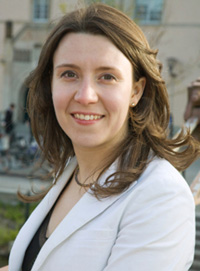 Maria Goundorina was born in 1978 in Novosskolniki, Russia. From the age of 7, Maria sang in a children’s choir, which developed into a choir school. She subsequently studied at the Ippolitov-Ivanov Music College in Moscow, where her conducting teacher was Ljubov Krasavina. In 1997, Maria was accepted to the Tchaikovsky-Conservatorium, which was a dream come true. Her conducting teacher at the conservatorium was Professor Boris Tevlin. During autumn 2001, Maria was an exchange student in Vienna to prepare her Diploma work on Arnold Schönberg’s Gurre-Lieder for the Conservatorium in Moscow. After her Diploma degree in choir conducting at the Tchaikovsky-Conservatorium, Maria again went to Vienna to do postgraduate studies in Musicology at the Universität Wien. After her finished degree, Maria returned to choir conducting, this time at the Royal College of Music, Stockholm with Professor Anders Eby. In 2005, she was accepted as exchange student, and Maria graduated with an Advanced Postgraduate Diploma in Choir Conducting in spring 2008.
As a member of different choirs in all three countries of her studies (the Chamber Choir at Tchaikovsky-Conservatorium, the Arnold Schönberg Chor in Vienna and Mikaeli Kammarkör in Stockholm) Maria has performed several world premieres and also some early music under the direction of Martin Haselböck, Ervin Ortner, Claudio Abbado and Nikolaus Harnoncourt, among others. Maria has conducted several choirs in Moscow (the Student choir of University of steel and alloy) and in Vienna (Ars Vivendi). Maria is at present the conductor of Allmänna Sången and Västgöta Nations Manskör – Korgossarna.
In Vienna 2004, Maria was a finalist in the Competition for Young Choir Conductors, and received two awards (for best interpretation of a romantic work by Wiener Staatsoper and for being an assistant conductor of the Euro-Choir). In 2007, Maria was the recipient of the Eric Ericsson travel stipend and a scholarship from the Swedish Royal Academy of Music. In 2009 Maria was among the finalists in the international competition Eric Ericsson Award.