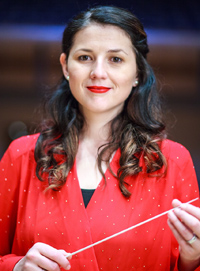 Mösenbichler-Bryant is the Executive Director of the World Youth Wind Orchestra and World Adult Wind Orchestra Projects, both part of the annual Mid-Europe festival in Schladming, Austria (www.mideurope.at). She also co-founded and conducts the North Carolina Youth Wind Ensemble and is the newly appointed conductor of the Schwäbisches Jugendblasorchester.

Verena grew up in Eberschwang, Austria. She began piano lessons at the age of 6, continuing later with church organ, flute, and bassoon.

Her conducting debut at age 16 was followed by a Kapellmeister Ausbildung with Johann Mösenbichler. Verena Mösenbichler-Bryant then studied symphony orchestra conducting with Ingo Ingensand at the Anton Bruckner Private University in Linz, Upper Austria, and received her bachelor’s degree, with distinction, in 2005. She completed her Master of Music in 2007 with Kevin Sedatole at Michigan State University, followed by a DMA in Wind Ensemble Conducting in May 2009, from The University of Texas at Austin with Jerry Junkin.

Verena Mösenbichler-Bryant’s transcription of John Corigliano’s Grammy-winning work, Mr. Tambourine Man, for Wind Ensemble and Amplified Soprano, published by G. Schirmer, was strongly praised by the composer, and has received numerous performances since its 2009 premiere. Additionally, she has arranged and premiered Eric Whitacre’s Goodnight Moon for Soprano and Wind Ensemble and Sing Gently, available through Hal Leonard, and Steven Bryant’s all stars are love for Soprano and Orchestra. She has also published an article in GIA’s respected Teaching Music Through Performance in Band series. Verena has served as guest conductor and clinician across the United States, Taiwan, Japan, Germany, Portugal, France, as well in her native Austria and is winner of The American Prize in Conducting, 2019-20, in the band/wind ensemble university division.