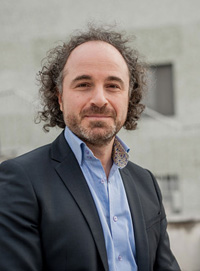 Born in Russia (1972), Alexandre Grandé began studying music at the age of seven at the prestigious School of Choral Art in Moscow. Eleven years later, he graduated with a diploma in choir conducting and music pedagogy. He also studied conducting at the Moscow Conservatory, graduated from the Paris Regional Conservatory in composition and orchestration, and received an Excellency Prize in orchestra conducting at the Rueil-Malmaison Conservatory.

To improve his conducting level, Alexandre Grande went to Israel to study at Rubin Academy of Music of Jerusalem with maestro Mendi Rodan.

Upon his return to Paris in 1999, where he lives now, he was named as the assistant conductor of the Polyphorum Orchestra and conducted Mascagni's « Cavalleria Ruscticana ». In 2000, he created the Calli-Phonia Orchestra which he conducted until 2003.

In August 2005, he conducted the first performance in Holland of Chostakovitch's « Story of a silly baby mouse » (for the Orlando Festival).

In 2006, he conducted a production « Comme des Bêtes » at the Théâtre des Champs-Elysées (Paris), a musical show including his own music and music of Shostakovich, Prokofiev, Stravinsky...

Today he is one of artistic directors of the Ensemble Orchestral Integral, which he formed in 2006.
With this orchestra, among the most importants projects, he created the « Songe dune nuit d’été. Variation printanière », which he performed with Ensemble Orchestral Integral in the theater of Fontainebleau. In the same theater, he conducted 2 operas buffa « Rayon de Soieries and La Poule Noire » by Manuel Rosenthal.

Professor of orchestra conducting, he is today a director of the Conservatoire Régional d’Aubervilliers - La Courneuve, an spécial music / dance / theatre school (about 1500 students).