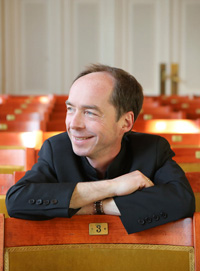 Born in Lower Austria, Heinz Ferlesch has successfully established himself as a conductor of his baroque orchestra Barucco as well as a longtime choirmaster of Wiener Singakademie.

He studied at the Anton Bruckner Conservatory Linz and at the University of Music and Performing Arts with Herwig Reiter and Johannes Prinz. At the age of 27 Heinz Ferlesch has been appointed Artistic Director of Wiener Singakademie by the Vienna Konzerthaus, therefore he is the youngest Artistic Director in the choir’s history.

In 2002, Heinz Ferlesch founded his orchestra Barucco and since then he has increased his appearances as an orchestra conductor. Barucco, a young ensemble consisting of international baroque specialists, focuses mainly on the music of 18th century. Various CD recordings and broadcasts show the wide range of the orchestra’s repertoire: in 2004 the orchestra has recorded music by Antonio Vivaldi for the Austrian broadcasting station ORF, in 2006 a live recording of Handel’s „Judas Maccabaeus“ has been released by the ORF Edition of Ancient Music. In 2009 a recording of Handel’s oratorio “Alexander´s Feast” has been published. Recently the ensemble published H. Purcell’s "King Arthur" in an arrangement by H. Jasbar.

Heinz Ferlesch also works extensively with the choir Ad Libitum, which he has founded in 1993. This mixed choir is focusing on A-capella music and has been invited to Festspielhaus St. Pölten, to the Brucknerhaus Linz and various festivals, e.g. Internationale Barocktage in the Melk Monastery, Carinthischer Sommer or Internationale Händelfestspiele Halle. Concert tours took the choir to England, Italy, Greece and Germany.

Heinz Ferlesch is a guest lecturer of Berkshire Choral Festival and also member of the jury of several national and international choir competitions. Since 2002 he is teaching at the University of Music and Performing Arts Vienna.