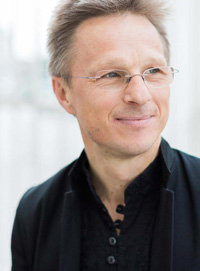 Music never is.
Either one listened to it already, or longs to do so. Likewise a musical ensemble never is. It becomes. Always. How, that is – among other factors – also my responsibility. And: To conduct is to trigger music, spark something in people who burn inside – that’s where I like to take a hand in …

Founder and artistic director of the COMPANY OF MUSIC and the Chorus Sine Nomine (www.chorussinenomine.at).

As a conductor he collaborated with orchestras such as the Wiener Akademie, the L’Orfeo Baroque Orchestra, the Ensemble Prisma Wien, Camerata Salzburg, the winds of the Vienna Symphonic Orchestra as well as the NDR Choir Hamburg, the BR Choir Munich, the Sociedad de Coral de Bilbao etc.

Regular concerts at the Wiener Konzerthaus, at the Musikverein in Vienna, at Jeunesse, Festival Salzburg Whitsun & Barock, the Styriarte, the International Brucknerfest Linz, the festival Ravenna or the Festival dell’ Aurora in Italy. Johannes Hiemetsberger teaches conducting for Choir and Chamber music ensembles at the mdw - Universität für Musik und darstellende Kunst (mdw) in Vienna and was the chief artistic director of the Webern Chamber Choir at mdw from 2011 to 2016 (www.mdw.ac.at/webernkammerchor/).

He is a regular instructor at and artistic director of vocal music courses and courses for choir conductors (Europa Cantat in France and Spain, Cantata Kaltenberg etc) as well as at workshops and master classes (Finland, Germany, Philippines, Taiwan, Italy) and was founder and director of youth choirs (OÖ Landesjugendchor 2000-2005, Neue Wiener Stimmen 2010-2013).

Since 2008 he is artistic director of the Stimmen Festival Freistadt in Upper Austria (www.stimmen-festival-freistadt.at).

He received his education at the Brucknerkonservatorium Linz, the Universität für Musik und darstellende Kunst in Vienna (music pedagogy, choir conducting with Johannes Prinz and Herwig Reiter) as well as the Konservatorium of the City of Vienna (Conducting with Georg Mark, Early Music).

JH is recipient of the Erwin-Ortner-Fonds as well as the Ferdinand Grossmann-Prize.