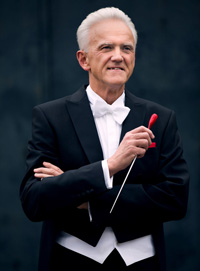 Johann Mösenbichler serves as Professor of Conducting at the Anton Bruckner Private University of Music in Linz and, since 2006, is the principal conductor of the Bavarian State Police Wind Band. Prior to this appointment, he taught at the University for Music and Performing Arts in Vienna.
He studied conducting, piano, clarinet, and saxophone at Universities in Linz and Vienna. Since early in his career he has focused on his passion – the wind band and its literature.
Performances, guest conducting invitations, master classes, and competition adjudication have brought him to Asia, the USA, and countries throughout the European Union.
In 1997, Johann Mösenbichler served as executive director of the WASBE International Youth Wind Orchestra in Schladming, which led to the formation of the annual MID EUROPE festival. He subsequently played a key role in developing the festival and since 2000 serves as Artistic Director.
Prof. Mösenbichler received the FAME-AWARD for “exceptional work and interpretation of contemporary music”. The Upper-Austrian Government honored him for his services and dedication with the title “Konsulent für Musikpflege”. In addition he is conductor of the Euregio-Blasorchester (EBO) in Germany, where he received the honorary title of
“Euregio-Kultur-Botschafter.”
In 2002 he received the “Midwest Clinic International Award”. Prof. Mösenbichler served as guest conductor of the Sinfonietta Da Camera in Salzburg, the Grazer Symphonic Orchestra, the South-Bohemian Chamber Philharmonic in Budweis and the Oberstorfer Summer Academy.
In 2006 he conducted the Asia Symphony Orchestra as part of the opening concert of the new Asia Concert Hall in Shanghai. In addition to Shanghai he has conducted in numerous famous concert venues in Austria, Germany, Spain, and Switzerland.
Johann Mösenbichler serves as faculty at the Bundesakademie in Trossingen, Germany and since 2012 is in charge of the conducting track.
In 2013 the Bavarian State Opera Munich hired him as artistic director for the project “Wagner vs Verdi”, and in 2014 he debuted as part of the concert “Fostering young artists” in Bayreuth, Germany.