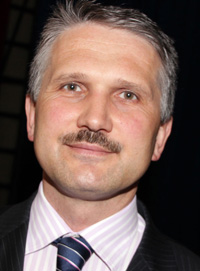 Milan Kolena is a conductor, artistic director of Bratislava Music Festivals, Associate Professor of choral conducting and Gregorian Chant at the Academy of Performing Arts in Bratislava and the president of the Slovak Choral Association. With his choir Apollo and Schola Gregoriana Bratislavensis Milan Kolena visited many prestigious choral competitions.
In 2014 he gave lectures at three American universities: Illinois Wesleyan University School, University of Missouri School of Music, Colorado State University. He frequently works as a member of the jury at various international choral and orchestral competitions in Slovakia, Europe and Asia. He was awarded the best conductor special prize of the „Singing World“ choral competition in St. Petersburg, Russia in 2015. In the same year he held choral workshops in China and Hong Kong.
He is a member of the International Council of the World Choir Games and Vice President World Youth and Children Choral Artists’ Association.
In 2018 he received the first place with his Apollo choir at “Moscow Sounds” Festival in Folk Music category and a Grand Prix for Sacred Music category.