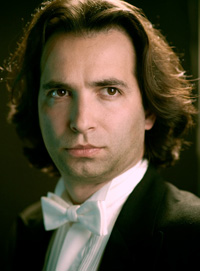 Pablo Boggiano was born in Buenos Aires, Argentina. He studied conducting at the national conservatory “Lopez Buchado” with Mario Benzecry and at the Argentinean Catholic University. At the age of 18 he made his debut at the cathedral of Buenos Aires with the Requiem of Faurè and became assistant of the National Youth Symphony Orchestra.

In Europe he studied with Prof. Scott Sandmeier Conservatory of Paris, with Thomas Doss Konservatorium Wien, Erwin Accel as well as with Jorma Panula in Helsinki. Prof. Berau, a former student of Olivier Messiaen, grants him the prize as winner of international competitions and conducted the Orchestra Boréal in Paris.

In Argentina he works also regularly with the Sinfónica Nacional and Orquesta Filarmónica del Teatro Colón, and was second conductor at the production of “Der Rosenkavallier” from New Yorok Metropolitan at Teatro Colón in 2017.

After ten performances of “The Magic Flute” in Niederösterreich with the support of Austrian government, he produced the World Opera-Tango premier in Theater Akzent Wien, with “Maria de Buenos Aires” from Piazzolla and “Mateo” from Martin Palmeri.

In 2013 he worked with the Royal Philharmonic orchestra of London in CADOGAN HALL.

During the season 2018-2019 he will work with the Tonkünstler-Ochester in Wiener Musikverein und Sankt Pölten and in 2020 will start his collaboration as a conductor with the Wiener Concert Verein, in Musikverein and Villach.

In May 2019 he will record a CD for Naxos Europe with music of the composer Esteban Benzecry and the National Philharmonic Orchestra of Lviv- Ukraine.