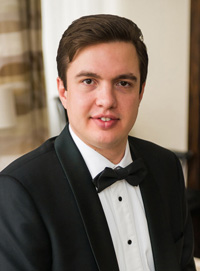 Pavel Kachnov was born in Kiev (Ukraine), into a very musical family - his father, Walerii Kachnov, being an orchestral and choral conductor, and his mother, Switlana Kachnova, being a pianist, who he started taking piano lessons from aged three.
In 1992, Pavel Kachnov enrolled at the Kiev Special Music School for gifted children, where he studied under the famous Ukrainian teacher, Irina Barinova.
During his studies, Pavel won numerous national and international youth music contests (Prokofiev International Piano Competition, Karamanov International Piano Competition and many more), and received scholarships from the Russian and Ukranian “New Names Fund” and the “President’s fund”.
Aged sixteen, Pavel moved to the Tchaikovsky National Music Academy with professors B. Fedorov and Professor B. Archimovich to continue his studies.During this time, he performed in Poland, Switzerland, Russia and Spain, at concerts with famous conductors such as K. Karabyts, V. Sirenko and M. Diadiura.
After graduating from Kiev Conservatory, Pavel moved to Vienna to improve his music with well-known pianist and teacher Oleg Maisenberg at the Universität für Musik und darstellende Kunst Wien.

In 2017, Pavel founded his own International Piano competition in Kyiv (Ukraine), and in April 2018, Pavel made his debut at one of the most famous concert halls in the world, the Vienna Musikverein.