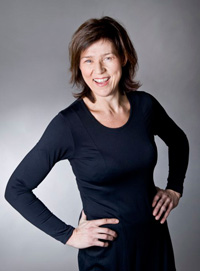 Margrethe Ek from Norway started conducting at the age of 14. Ek studied music for eight years, including master in singing, an education in music performance and presentation, and a diploma in conducting from the Norwegian Academy of Music. She has written a book of the health benefits of singing in a choir (Cantando 2012). An article of choir and health benefits are to be published in the bulletin of international federation of choral music (IFCM april 2014). Ek currently works as Head of Music-Dance-Drama department and a professor at Kirkeparken videregående skole (upper secondary school) in Moss, 60 km south from Oslo. She has previously worked at the University of Oslo within the subjects of song and conducting for 11 years. Being a conductor filled with energy and dynamic presentations, she has conducted several ensembles at high levels within several genres – both choirs and instrumental ensembles (symphony orchestras and wind ensembles). Ek’s different ensembles have often been seen on national TV and radio, and they have participated in choir contests at international levels with great results. Margrethe Ek has been acknowledged as both a lecturer and a visiting conductor for both businesses and musical ensembles in Norway. She is often invited to be a judge in both national and international choir contests. Today Margrethe Ek is the conductor of Moss Ensemble Consensus, founded in 2010.