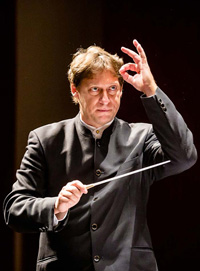 Doss was born 1966, in Linz, Austria, into a musical family (both parents were active orchestra-musicians). His undergraduate degree took place at the Brucknerkonservatorium Linz in music education, with an emphasis in trombone, composition, conducting, and piano. Subsequent studies took place in Salzburg, Vienna, Los Angeles, and Maastricht (Limburg).
Doss debuted with the Wiener Kammerorchester in 1988. He held residencies with various opera houses and festivals, working as both conductor and composer with, among others, the Brucknerorchester Linz, Philharmonisches Orchester Erfurt, Wiener Kammersinfoniker, Westfälisches Sinfonieorchester, Philharmonisches Orchester Budweis, Südböhmische Kammerphilharmonie, Wiener Kammerchor, Neue Philharmonie Frankfurt, and the Österreichisches Ensemble für neue Musik.
Doss is known for collaborating with artists from many different genres, such as Harri Stojka, Chris de Burgh, Thomas Gansch, John Williams, Steven Mead, Christian Maurer, as well as many others. His passion for wind and brass ensembles has taken his expertise and talent around the world. He has maintained a close relationship with the Mitropa/Hal Leonard publishing house since 2001 and has published numerous scores and CD’s with them.
Teaching and coaching have also become an increasingly important part of Doss’ work. Many of his students are award-recipients at international competitions. He also leads workshops and masterclasses at institutes across Europe, such as the Konservatorium Groningen (Netherlands), Lemmensinstitut (Belgium), Konservatorium Gent (Belgium), Universität Mainz, Mannheim (Germany), Musikuniversität Wien, and Anton Bruckneruniversität Linz (Austria).
Doss has been the coordinator for the „Ensembleleitung des oberösterreichischen Landesmusikschulwerk“ since 2006. He was professor for Ensemble-Conducting in Vienna Conservatory till 2012 and Professor for conducting at the Conservatorium Montiverdi in Bozano (I) till 2016.