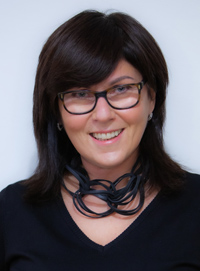 She was born in a family of Roman Kofman – the famous conductor, composer, and Honoured Artist of Ukraine (Chief Conductor of the National Symphony Orchestra of Ukraine; in 2003 –2008 he worked in Germany as the Bonn General Music Director, headed the Beethoven Orchestra and the Bonn Opera House) – and Iryna Sablina, the Choirmaster and Conductor who founded in 1971 the legendary Shchedryk Kyiv Children’s Choir.

Marianna Sablina sang in this choir when she was a child; later on during her studies at the R. Glier Kyiv Institute of Music she became the Choirmaster of Shchedryk.

In 1981–1986, Marianna entered the Ukrainian National Tchaikovsky Academy of Music and continued her studies under the lead of Professor L.N. Venedyktov in the class of Choir Conducting. After graduating from the UNTAM she continued working as the Choirmaster of Shchedryk Kyiv Children’s Choir.

Since 2002 Marianna Sablina has been the choir’s Chief Conductor and Artistic Director. Not only her career, but her whole life is inseparably entwined with Shchedryk Kyiv Children’s Choir – her lifetime project.

Since Marianna took the lead with Shchedryk in 2002, they have participated in the numerous festivals, contests, and competitions, performed at the special music events, and sang in the top music halls and stages of Europe (in the Baltic countries, Germany, Poland, Belgium, Sweden, Switzerland, Austria, and Italy).

In each festival and competition that Shchedryk participated under the lead of Marianna Sablina, they have made a great impression on the audience and were awarded the highest prizes.

The discography of Marianna Sablina, when conducting Shchedryk, includes some quite special recordings, such as Deutsche Welle release of the Shchedryk Children’s Choir’s concert “Christmas in Ukraine” in 2010; and the “Trois petites liturgies de la présence divine” by O. Messiaen performed by Kremerata Baltica and Shchedryk, conductor Roman Kofman – this CD was included in the collection of the best concerts in the history of the Lockenhaus Chamber Music Festival of Gidon Kremer.

With Shchedryk Kyiv Children’s Choir Marianna Sablina have had many joint projects with the world-famous musicians, such as Gidon Kremer, Giya Kancheli, Vladimir Krainev, Roman Kofman, Anton Sharoev, and have performed together with the National Symphony Orchestra of Ukraine, the Kyiv Chamber Orchestra of the National Philharmonic of Ukraine, Lviv National Philharmonic Symphony Orchestra, Beethoven Orchestra Bonn, and Kremerata Baltica.