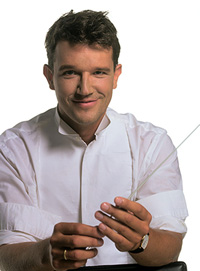 Viennese-born conductor Philipp Pointner started his career at Cape Town Opera/South Africa. There and at Gauteng Opera Johannesburg he is still a regular guest.

He continued his way in Germany, where he was Erster Kapellmeister at the Staatstheater Nürnberg for many years. He is guest at many European opera houses such as Staatsoper Hamburg, Oper Köln, Staatstheater Mannheim, Staatstheater Braunschweig, Opera Vlaanderen Antwerp/Belgium, just to name a few. In Austria he conducted at the Volksoper Vienna and the Oper Graz.

In concert Philipp Pointner is working with orchestras like WDR Rundfunkorchester Köln, Tonkünstler Orchester Niederösterreich, Staatsphilharmonie Braunschweig, Brandenburgisches Staatsorchester Frankfurt, Staatsphilharmonie Nürnberg and Oviedo Philharmonic/Spain. He is regular guest conductor at the Filarmonia de Stat Transilvania Cluj/Romania. In 2017 he will debut with the RSO Vienna.