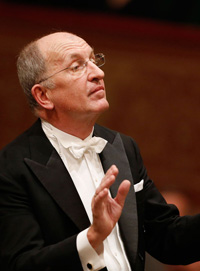 Erwin Ortner was born in Vienna, and had his first musical training as a member of the Vienna Boy's Choir under Ferdinand Grossmann. He later studied at the Academy of Music in Vienna (among others, with Hans Swarowsky and Hans Gillesberger). From 1980 to 2016 Ortner tought as professor of choral conducting and choral voice training, and from 1996 to 2002 he was dean of the University of Music and Performing Arts in Vienna.

Erwin Ortner is the founder and artistic director of the Arnold Schoenberg Choir. From 1983, until its dissolution in 1995, he was also director of the Choir of the Austrian Broadcasting Corporation (ORF). The Arnold Schoenberg choir had a long association with Nikolaus Harnoncourt and the Concentus Musicus Wien, with which it has made numerous recordings and won a number of awards. In 2002 the Schoenberg Choir won a Grammy Award in the category “Best Choral Performance”, for a recording of Bach's Matthäus-Passion, conducted by Nicolaus Harnoncourt. In this category the conductor and the Choir director are honoured.

As a conductor, Erwin Ortner has worked in New York, Paris, Tokyo, Rome and Salzburg, where he has been involved in projects with Maurizio Pollini. He is regularly invited to work with leading orchestras, opera houses, festivals and concert halls, including the RSO-Vienna, Camerata Salzburg, Deutsche Staatsoper Berlin, Theater an der Wien, Salzburg Festival, Mozartwoche Salzburg, Musikverein Vienna and the Vienna Konzerthaus.) His frequent appearances as a guest conductor demonstrate his manifold activities both throughout Austria and abroad.

Aside from his work as a conductor and chorus master, Erwin Ortner is also sought after internationally as a lecturer and adjudicator for master-classes in orchestral and choral conducting. In 2010 he became artistic director of the "Wiener Hofmusikkapelle" founded in 1498.